Sari: The Dress Of The Goddesses Of India That Is Fashionable Among The Famous

The sari, the seven meters of silk that have enveloped India’s women for several civilizations, remains through the centuries as the feminine dress of the Asian country and now seeks a privileged place in fashion with its foray into the international red carpets

The entry of the former Indian Miss World Priyanka Chopra in the American film industry, added to her rise in popularity after her recent wedding with singer Nick Jonas, has staged the ancient costume as an enigmatic and glamorous garment worthy of the stage choicest of the show. 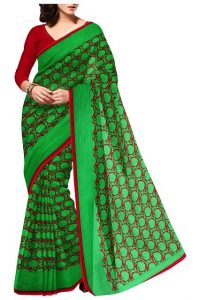 A short blouse that ends above the navel, and a rectangle of exactly seven meters of fabric that wrap women around the waist, adding a set of pleats in the front before passing it as a stole over the shoulder, is the set that assembles the ancient Indian costume.

In early June, Chopra’s appearance on the cover of the American magazine InStyle dressed in the continuous piece of draped fabric focused on clothing reserved for more traditional settings.

How does it stay well positioned?

Clothing of Hindu mythology’s goddesses, the fabric remains intact armed in the female body thanks to an ancient and meticulous technique transmitted from mother to daughter for generations.

The history of the sari

For years, even in our Upanishads and Ramayana, our Vedas (ancient Indian scriptures), our gods and their disciples used to wear saris, especially in the ancient city of Kashi (Varanasi), hand-woven silk that is also described in our Vedas.

The author of “Saris: Tradition and Beyond,” Rta Kapur Chishti, says that to get an idea of ​​its origin, one can “take historical references to the Vedas or the Harappan civilization (3300-1300 BC), where you can find sculptures and texts on the use of seamless garments. “

However, historians agree that the ancient garment, initially used as a piece of cloth to cover nudity, does not have a precise reference of origin. It would not be possible to give a date of birth to the sari, and nobody should try it. 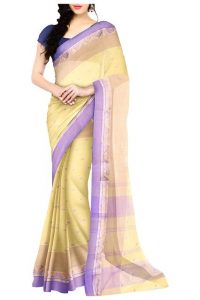 Reinventing a traditional piece is one of the challenges of Indian designers trying to make new references on the catwalks and perform the complex task of dressing the goddesses of Bollywood, the Indian film industry.

The saree in India is reinventing itself by using textiles and non-traditional fabrics to create the garment. More contemporary, lighter designs are being made,” designer Kanika Jain, the founder of the Kanelle brand, explains to Efe. “These are the saris of the new era,” he added.

Despite the entry of major international brands, the sari persists in Indian women’s wardrobe, especially for weddings and special events.

There is also a conservative trend that wields calls to protect ancestral culture from Western influence. “Government officials should wear clean clothes … like the sari,” the government of the state of Tamil Nadu (south), according to a circular circulated in the Indian media “India Today.”

For some women in India, the sari is a symbol of their identity with the national culture. For the Tilfi saris house director, Udit Khanna, the sari fever has increased in the younger generations with “new ways to put together the saree, add accessories and combinations.”

The also Indian Deepika Padukone showed off the beauty of the sari on the French Riviera on the red carpet of the last Cannes Festival, ruling out wearing outfits by the iconic designers who move the international catwalks.