With a constant change and evolution, Indian fashion has managed to find a place within the textile world of the highest level thanks to its modernization capacity, while maintaining a very distinctive and recognizable own style. Discover everything that makes Indian fashion a benchmark in the 21st century. 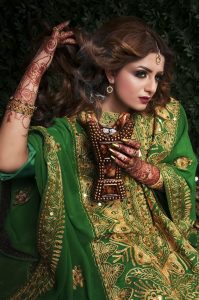 Although the tradition of Indian fashion dates back centuries, when traditional clothing such as saris, dhotis, or ghagra cholis was the norm, the explosion of fashion that Bollywood cinema films took in the 1960s caused women to begin to experiment with a riskier type of fashion.

At the end of the 80s, a great change took place within the Indian fashion industry.

The Indian fashion revolution after independence

In the early 1990s, the Government of India created the National Institute of Fashion Technology in Delhi, which played a key role as a quarry for new designers in subsequent years. Also, the country’s economic liberation after gaining its independence led to a more austere turn of fashion towards sequins, gold threads, and ornate embroidery. Applying all this in skirts, dresses, and pants allowed Indian fashion to translate the entire tradition of its culture in clothing considered modern and very western. They also highlighted additions to corsetry and satin and lace blouses that began to replace traditional choli and saree. Thus started an evolution that would not end until now.

With the addition of 2000, Bollywood took the center spotlight again thanks to the multiple collaborations of famous artists with Bollywood actresses and actors, who wore reinventions of Indian fashion such as the cocktail sari or the Kurti in their films. Today, the Indian fashion industry moves hundreds of millions, exports great designers – such as the famous Manish Arora, the first Indian designer at Paris Fashion Week – and organizes Indian fashion weeks that have nothing to envy. from New York or Milan.…